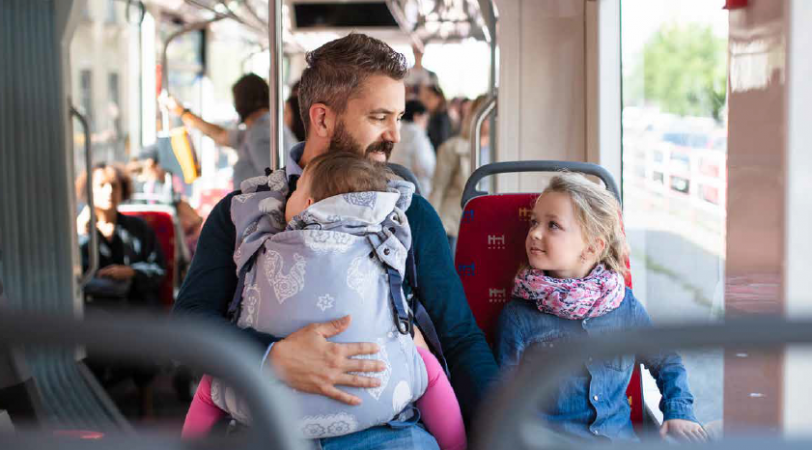 A bold pledge to increase the number of people using public transport, walking and cycling sits at the heart of the Welsh Government's bold new transport strategy, published on Friday.

The new strategy – the result of a major consultation over the last year - aims to encourage people out of their cars, with a new target for 45% of journeys to be by sustainable means across Wales by 2045, up from 32% currently.

The strategy comes as more than £210 million is being invested across Wales in 2021/22.

More than £115 million is being allocated to local authorities to spend on transport projects that will support the commitments in Llwybr Newydd.

In addition, £70 million is being made available to Blaenau Gwent County Council to secure the additional service between Newport and Ebbw Vale and contribute to the longer term ambition of 4 trains per hour. The funding will enable infrastructure improvements, to be taken forward alongside Network Rail and Transport for Wales.

Another investment will see £25 million to support the Wrexham Gateway project, creating better connected bus and rail transport and redevelopment of the area around Wrexham General.

During 2021/22 £75 million will be spent on active travel, an increase from £5m at the start of this Welsh Government term.

"Llwybr Newydd is a landmark moment and will help to fundamentally re-shape transport in Wales.  It will encourage new and greener infrastructure and change the way we make decisions about investment in transport right across the country.

The climate emergency is very real and it means we must take urgent action to reduce the carbon footprint of the transport system in Wales. That’s why we have set bold new targets for more sustainable transport forms like walking, cycling and public transport. This will help reduce reliance on the car by making the sustainable alternatives more appealing.

Doing this means investing in high quality public transport alternatives and that’s why we are providing more than £210 million in transport schemes that will contribute to ambitions in our new plan.

We’ve made a good start, with major investment in things like Metro, but we know we need to go further and faster and Llwybr Newydd sets us on the path to a transport system genuinely fit for future generations."

"A greener transport network will only be achieved if we can provide people with convenient alternatives to the car. Investing in trains, buses and cycle routes will not only help people get around but will make it easier to take choices that protect our planet and contribute to social justice.

We are delivering this strategy in a pandemic but that isn’t going to stop us being bold. In fact it only makes it more important – high quality public transport will be critical to a fairer, greener and more equal recovery after Covid.

The rise in remote working highlights the major changes underway in our economy.  Local journeys are particularly well-suited to cycling and walking and we’re building a transport network that meets the needs of the future, not the needs of the past."

As part of the £115 million investment being announced in local authority funding, nearly £47 million is being spent on active travel schemes, helping develop routes that support walking and cycling.

A further £6.4 million is being committed through the Safe Routes in Communities fund, with a particular focus on school routes. Another £20 million will be confirmed through the Active Travel Fund later in the financial year, taking the total dedicated active travel spend to £75 million – up from £5 million at the start of this Senedd term.

The Road Safety Capital grant is worth £5.1 million and will include funding to support training initiatives to improve safety for cyclists.

The Local Transport Fund will commit £28.9 million to projects to support Wales’ transport network. Applications were assessed against the sustainable transport hierarchy set out in Llwybr Newydd, with emphasis given to improving public transport reliability and journey times.

A further £9 million has been allocated to local authorities to move to zero emission vehicles and to roll-out charging infrastructure. Next week the Welsh Government will also publish its Electric Vehicle Charging Strategy to boost confidence for drivers wanting to use electric vehicles.

The Roads Resilience Fund, worth £17.4 million, is in place to address disruptions caused by severe weather to the highway network, especially to the public transport network.

Another £3 million is being committed to the North Wales Metro, helping to create an accessible, integrated transport system for people in the region.