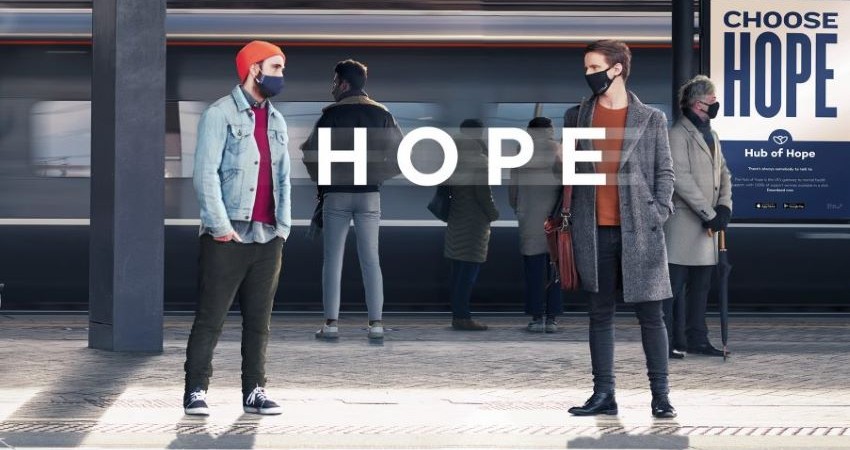 The campaign launched as new research shows huge rise in mental health issues as a result of the pandemic.

According to research undertaken by Network Rail and national mental health charity Chasing the Stigma, young people have seen their mental health deteriorate the most since the pandemic began.

Almost three quarters of 18-24-year-olds (69%) say Covid-19 has had a negative impact on their mental health. Students were also shown to be significantly impacted, with 64% claiming it has affected their mental health, along with 65% of those who identify as being LGBT+.

Meanwhile, almost half participants across the UK agreed their mental health had taken a hit since the pandemic began, with respondents reporting increases in anxiety (40%), loneliness (31%) and depression (31%).

The research, which studied more than 2000 adults across the UK, was carried out as part of a new There is Always Hope campaign aimed at encouraging those struggling with their mental health to seek help before they reach crisis point.

Andrew Haines, chief executive of Network Rail, said: “We have a huge responsibility to keep people safe and support the wellbeing of both our staff and passengers.

“Through this campaign, we are trying to help vulnerable people who are at risk before they even come to the rail network by signposting them towards support services through the Hub of Hope.”

Jake Mills, founder and chief executive of Chasing the Stigma, is featured in the There is Always Hope film. Jake set up the charity and developed the Hub of Hope following his own suicide attempt. He realised when talking through his own personal experience that many people didn’t know where to turn within their own mental health issues and he wanted to offer support to others who found themselves in a similar situation.

Jake said: “Mental health has never been more important, especially as the results show the covid-19 pandemic is having a real impact on people, particularly young adults, across the UK.

“Breaking down the stigma around mental health and giving people access to the right support at the right time, is essential as it can make such a difference, and it’s the reason why we set up the Hub of Hope.

The latest campaign forms part of the rail industry’s efforts to reduce suicides across the rail network. Suicide is sadly an ongoing challenge faced by Network Rail, train operating companies and the British Transport Police. These organisations are working together to take ongoing measures to prevent such incidents, including training thousands of industry staff and running campaigns such as Small Talk Saves Lives, which calls on people to look out for one another and intervene safely if they see someone who might need help.

Anyone struggling with their mental health can download the Hub of Hope app on the Chasing the Stigma website or at www.hubofhope.co.uk.

The app also has a Need Help Now? button that links straight through to Samaritans and Crisis Text Line.