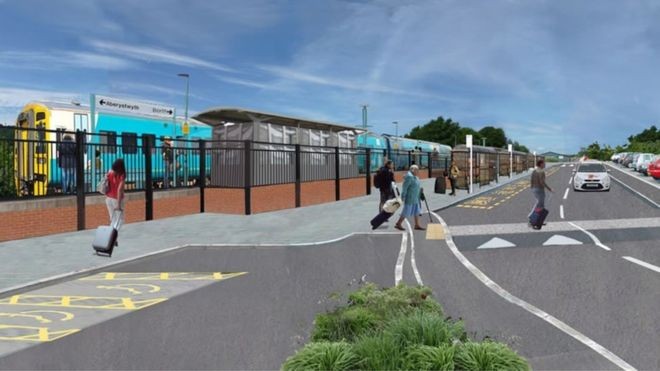 The new Bow Street station in Ceredigion is due to open later in 2020 and will be served by Cambrian Line trains between Aberystwyth and Shrewsbury. It is estimated to cost about £8 million and will be funded by the Welsh Government and the UK's Department for Transport.

Wales' Transport Minister Ken Skates said: "Our vision for railways includes the opening of new stations and the improvement of connectivity across all regions in Wales.

"This is the beginning of delivering that ambition."

The original station was closed as part of the Beeching cuts in the 1960s that saw the rail network in Wales decimated. The new station will be built south of the old site, which is now home to a builders' merchant.

The scheme is being delivered by Transport for Wales (TfW), Network Rail and Ceredigion council.

This will be the first station that TfW has built since taking over the Wales and Borders rail service. TfW chief executive James Price said:

"We've committed to at least five further schemes, demonstrating our commitment to investing in connecting communities throughout Wales to the rail network," he said.

Claire Williams, a community rail officer at Ceredigion council, said: "The Bow Street Interchange project will make the railway more accessible for passengers from all over the county as well as reducing the amount of congestion on the roads within the area, therefore reducing the carbon emissions which of course is fundamentally better for the environment."

Ceredigion councillor Paul Hinge said the new station was the "culmination of years of hard work" and would restore a "vital facility" on the west Wales coast.