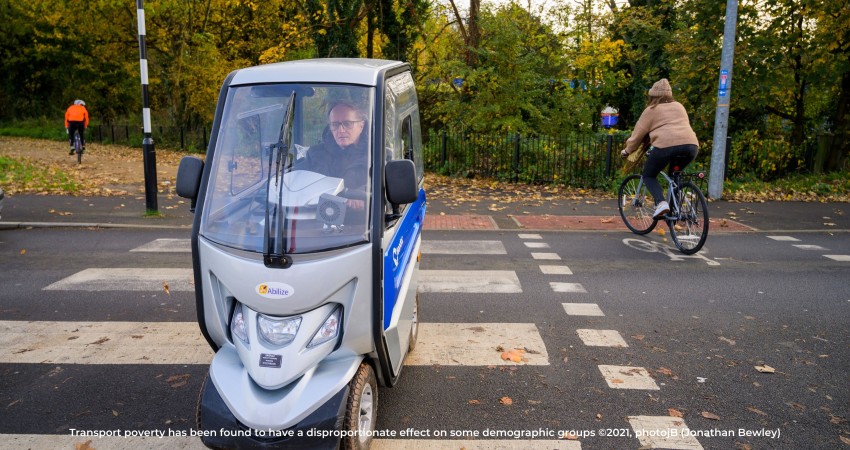 'Making the Connection', a new report published by Sustrans Cymru, has found that people across all parts of Wales are suffering the effects of transport poverty. That's why Sustrans believes that, in an ongoing cost of living crisis, urgent action is needed to aid those most in need of support and frozen out of transport options.

Making the Connection outlines the stark reality of unaffordable and unreliable transport options for many people in Wales.

Many people, as a result, are unable to access the transport they need to live happy and healthier lives.

In most areas of Wales, 40-50% of households are spending more than 10% of their income on the costs of running a car (whether they have one or not).

It is predominantly the more rural areas of Wales that are least able to access the services necessary for day-to-day life.

We know that poor access to services compounds other forms of deprivation in our communities.

Sustainable, reliable, and affordable transport options that are accessible for all can help communities across Wales to thrive.

The rising costs of accessing transport in Wales

"Making the Connection is a really timely and important insight into the all-too-real effects of rising costs of accessing transport in Wales, particularly against the current context of the cost-of-living crisis we're all experiencing.

"We know that transport poverty contributes to a vicious cycle where people can't access quality education or much needed services, which ultimately makes it more difficult to lift themselves out of poverty in the future.

"Here at Sustrans, we want to see a Wales where absolutely everyone has the freedom and ability to travel affordably, sustainably, and safely.

"Not enough has changed since Sustrans Cymru published its initial report ten years ago - there needs to be decisive action taken now, or we risk things getting even worse for those most affected by transport poverty."

In the past decade, fuel prices have risen by less than 10% while rail, coach and bus ticket prices have increased by between 33% and 55.7%.

Higher fares have a greater impact on people who rely on public transport as well as people on lower incomes.

For the 23% of people in Wales who do not have access to a car, public transport services are relied upon to access basic and essential services.

Since 2010, bus vehicle numbers have decreased by 17.8%, meaning that 12% of people in Wales are now without any public transport links in their local area.

Sustrans' report highlights that the impact of transport poverty affects some demographic groups disproportionately - alongside income and locality, those most affected are:

The Making the Connection report also confirms that people living in rural parts of Wales or in areas with high levels of deprivation are the worst affected by transport poverty.

Where services do exist, they are not guaranteed to meet the needs of the communities they serve.

Irregular public transport services have bigger impacts on those living in rural areas of Wales, where public transport plays a key role in enabling access to vital services, employment, training, and recreational opportunities.

Half of rail stations in Wales, according to the report, are not fully accessible to disabled people, while 34% have no access in place for wheelchair users.

Tangible impact on everyone in Wales

Whilst all households in Wales are feeling the effects of the developing cost of living crisis, it will certainly have a disproportionate impact on lower-income households.

As a result, many people in Wales will have to make some serious decisions about how, when, and where they travel.

Sustrans' report also outlines the impact transport poverty has on people's employment opportunities, as well as the education opportunities for children and young people.

A need for change

Urgent action is required to address the widespread issue of transport poverty in Wales.

At Sustrans, we want everyone to have the freedom to access the services they need, in the communities they live.

We are calling on the Welsh Government to develop a clear plan of action for addressing transport poverty, which is targeted at those most in need of support.

This should come alongside:

Working together, we can achieve a transport system that works for all and alleviates, rather than exacerbates, inequality.

We believe that transport can play a vital role in creating a Wales of truly connected and equal communities.

Read the Making the Connection report in full.

Learn more about the work that Sustrans is doing in Wales.