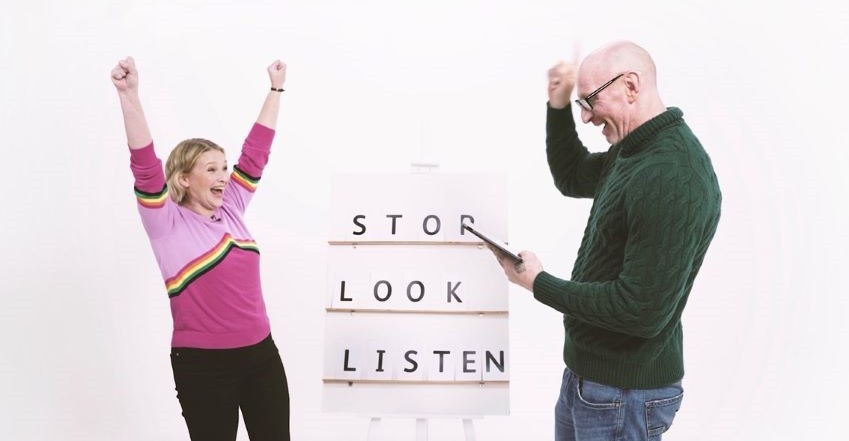 Gavin and Stacey actress, Joanna Page, and ex-Wales rugby captain, Gareth Thomas have been put through their paces in a new educational video, designed to teach children about rail safety.

The #IAmTrainSafe campaign, launched by Network Rail on Monday 24th May has been created to help make learning about rail safety fun and engaging for children from a young age, ahead of the end of May bank holiday and upcoming Summer holidays.

In the video, which asks children to take a safety quiz and pledge after watching, Joanna and Gareth are put to the test with a series of activities covering topics like; trespass and vandalism, level crossing safety, railway electrification and station safety.

Each year there are around 13,500 trespass incidents on Britain’s railways resulting in the loss of around 20-30 lives and in the past decade, 69 people have died after being electrocuted on the railway.

The ‘I am train safe’ campaign forms part of Network Rail’s commitment to helping parents and teachers educate children on the dangers of the railway.

Making the decision to take part in the safety campaign was an easy for Joanna and she learned a lot herself, too:

“I’m doing it because I’ve got three children and I think from the minute that I had children you just worry about their safety”, Joanna said.

“I think it’s important to try and get these messages across to children in a really nice, fun way, so they realise how dangerous the railway can be.

“I’ve learnt so much in all of the different challenges we’ve done and the quiz. I didn’t know any of it before.”

For Gareth, this campaign is about teaching children that some risks just aren’t worth taking:

“I realise that what I did as a kid around train tracks was really stupid and children are still doing it. It’s like this generational thing that has never stopped”, Gareth said.

“It’s great to be a part of something to help change that culture, changing that way of life where young people think that it’s okay to dare someone to do something near something that’s so dangerous.”

“So many more families are having staycations now in Britain and there are so many people who might never have been close to a railway line before and we have to educate on the dangers.

“Rail safety may not sound like the most exciting topic for young people to learn about, which is why we’ve teamed up with some familiar faces to educate people in a completely new way.

“We hope that by sharing safety messages in a light-hearted and fun manner, young people in particular will engage with this important topic and remember the life-saving messages contained within.”

“Each year, hundreds of people take risks on and around the railway, resulting in tragic consequences and life-changing injuries.

“We continue to proactively patrol the railway network across Wales. Safety is our number one priority and we’re working with Network Rail to remind everyone of the importance of taking care around the railway and that everyone loses when you step on the track.”

You can watch the video, take the quiz and pledge to be train safe on the #IAmTrainSafe website.