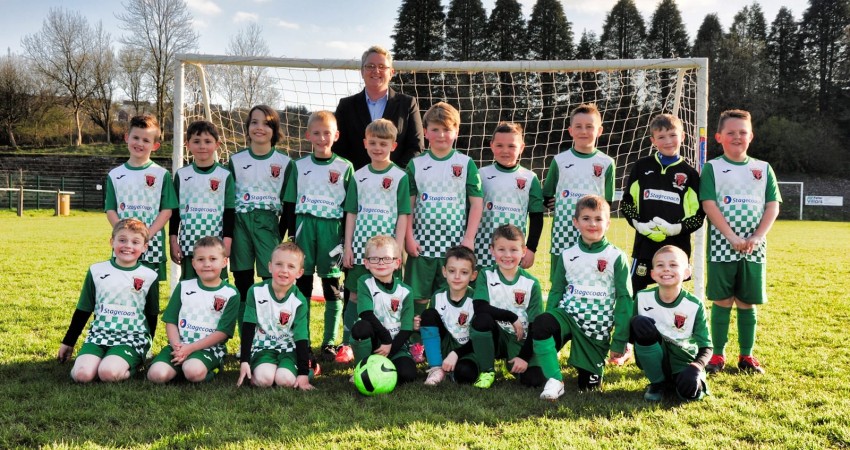 Stagecoach in South Wales has supported local football club, RTB Ebbw Vale FC by sponsoring the football kits for the under 9s and under 10s teams.

Stagecoach Merthyr depot Inspector, Andrew Pope approached Stagecoach as he coaches the under 10s team and has been associated with the club for three years since both his sons joined the football club in 2016.

Stagecoach offered £550 to pay for new kits for both teams which display the Stagecoach logo and the FC club logo. Merthyr Depot’s Acting Operations Manager, Maria Muggridge met both teams to present them with their new kits.

Jonathan Greenland, Head of Youth Development for the club said: “RTB Ebbw Vale would like to personally thank Stagecoach in South Wales for their generous sponsorship for both our Under 9’s and Under 10’s teams. It has enabled us as a club to provide the children with kits and equipment that will help them develop their skills as footballers. Our goal as a club is to encourage children of all ages to take part in football in a fun and safe environment. We like to give them the chance to reach their full potential as future athletes.

Thanks to Stagecoach in South Wales we have been able to take a step closer to that goal and have had the opportunity to see our teams compete in tournaments and events across the UK. We are proud as a club to display the Stagecoach logo on our kits to show the company’s support and are humbled to be part of the Stagecoach family.”

Nigel Winter, Managing Director, Stagecoach in South Wales said: “We encourage our staff to take part in local charity events or community organisations and are happy to support them with any fundraising activity. It’s fantastic to see the young footballers wearing their new kits and we wish the teams the best of luck in their future matches”.