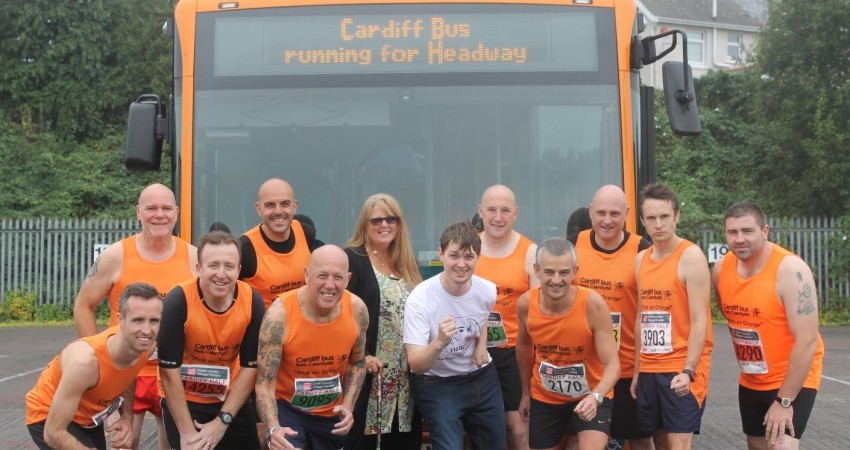 A group of employees from Cardiff Bus will be taking part in the Cardiff Half Marathon this Sunday to raise money for Headway Cardiff.

Headway Cardiff, a charity that supports those affected by brain injuries, was chosen by Cardiff Bus employees as the company’s charity partner of the year for 2016.

The Cardiff Bus Half Marathon team will be made up of ten employees ranging from bus drivers to senior directors.
Gareth Mole, Simon Mohammad, Bryan Meredith, Gareth Emery, Phill Whaley, Keith Saunders,
Jamie Blackwood, Jeff Deere, John Wiltshire and Kevin Hancock will all be tackling the 13.1-mile route around Cardiff on Sunday.

Alex Hughes, age 23, from Cardiff, was a 16 years’ old student at Radyr Comprehensive School, when he was attacked and hit on the head with a bottle whilst on holiday in Puerto Andratx, Spain.  His injury has left him with left side weakness, affecting his balance, walking ability and restricting his use of his left arm and hand.  He also has a vision impairment and trouble with memory.

He attended Headstart, the group at Headway for young people, to help him relearn lost skills and regain his independence.  He went on to do B Techs at College in Life Skills and Media and Arts.

Judith Dutton, age 48 and a mother of three from Barry suffered a sub arachnoid haemorrhage on the day she was accepted to be a foster parent. She was in University Hospital of Wales for six weeks undergoing complex procedures to stop the bleeding on the brain and her heart failing.

She now has difficulties walking because of balance problems, has speech and memory difficulties and fatigue. She attends the Headway Cardiff Social group for brain injury survivors.

Gareth Mole, engineering director at Cardiff Bus, said: “There are so many worthy charities but as an organisation in Cardiff, we wanted to support a Cardiff-based charity and Headway Cardiff was the perfect fit.

“This is the latest fundraising initiative we have organised this year to raise money for Headway Cardiff. We’ve all been training really hard and it’s great to see so many of the team of all different ages want to take part to help Cardiff Bus raise vital funds for the charity.”

Rebecca Pearce, chief executive of Headway Cardiff, said: “We are very grateful to Cardiff Bus for choosing us as the company’s charity partner. We’ve enjoyed working with the team on their fundraising efforts this year.

“We can see that all of the team have been putting in a lot of effort training for the Cardiff Half Marathon and we wish them all the best for this Sunday. We’ll be there cheering them on!”

You can support the team and make a donation here.