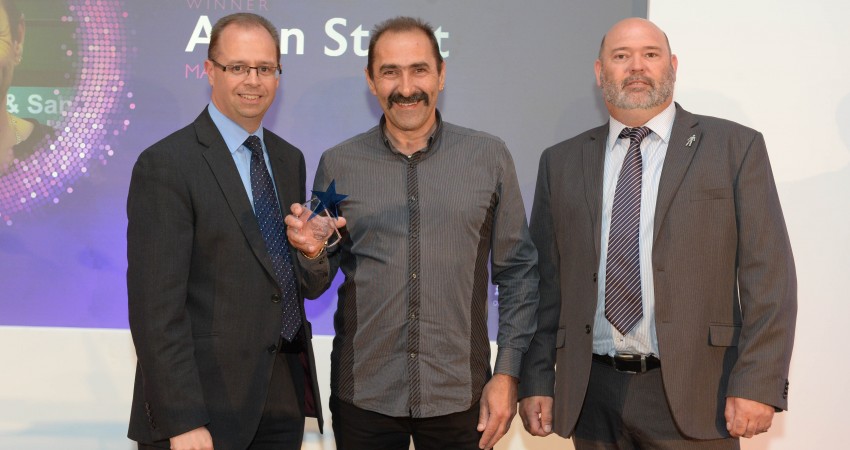 A bus driver from Maesteg has been given a Hero Award at the First Bus Excellence awards for his efforts to help save the life of a man injured in a road traffic accident.

Allan Stent (51) has worked for First Cymru for the past 16 years as a driver with the Maesteg depot. Earlier this year, while travelling back to the depot in his bus at the end of his shift, he found himself first on the scene of a serious road traffic accident. A motorcyclist had been in a head on collision with a car and was badly injured. In an attempt to help the man, Allan stepped in to give him CPR while waiting for the emergency services to arrive. Sadly the injured man did not survive but Allan’s efforts to help, giving CPR for around 20 minutes gave him the best possible chance and he was widely commended by his colleagues, one of whom nominated him for the prestigious hero award.

On Wednesday 15 June Allan was presented with the award in front of colleagues from across First Bus at an award ceremony held at the Madejski football stadium in Reading.

Talking about his achievement, Allan Stent said: “The awards ceremony was great. It was a much bigger occasion than I expected it to be, with colleagues and senior managers from across First Bus.  I really enjoyed the day.

“The actual incident still haunts me, but I know I did all I possibly could to help the injured man. I wish the final outcome had been different, but you can’t change the past. I would just urge others to learn CPR and first aid, it’s such an important skill to have.”

Justin Davies, Managing Director of First Cymru, added: “We’re extremely proud of Allan and the actions he took on the day in question. He kept a level head in an extremely stressful situation, putting his first aid training to good use in trying to save a man’s life. We remain deeply saddened by the fact that the man involved subsequently passed away but wanted to commend Allan for stepping up to the plate on the day and doing what he could to help.  Many others in the same situation would freeze with shock, but Allan reacted positively, and for that reason he is a hero to us.”

In total 15 Excellence awards were handed out on the day, commending everything from ‘Apprentice of the Year’ to those championing Innovation and Change, and Sustainability.

For more information about First Cymru log onto www.firstgroup.com/cymru. First Cymru is also on Facebook, at www.facebook.com/firstcymrubuses.