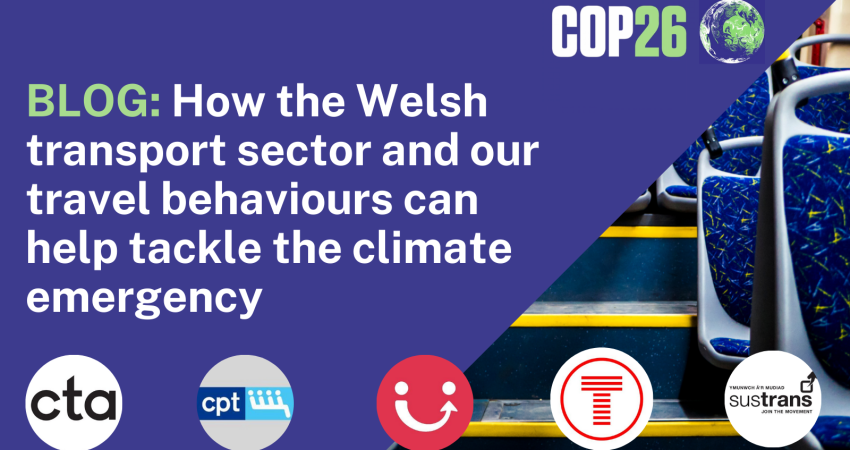 COP26: How the Welsh transport sector and our travel behaviours can help tackle the climate emergency

The growing impact of climate change continues to be felt across the world, with increased frequency and severity of extreme weather events, and subsequent impacts on people and wildlife. The need to act is urgent and will be brought to the forefront during the COP26 conference in Glasgow from 31st October to 12th November 2021.

We’ve asked key organisations from across the Welsh transport sector how they think the industry can support the goals outlined to tackle climate change and what this means in practice for transport in Wales. Thank you to representatives from Traveline Cymru, Transport for Wales, Confederation of Passenger Transport, Community Transport Association and Sustrans Cymru for contributing to this blog.

COP26 is the 26th annual United Nations climate change conference. It will take place in Glasgow from 31st October to 12th November 2021.

The conference is an opportunity for world leaders, negotiators, government representatives, businesses and citizens to come together and agree joint actions in the fight against climate change. The last conference took place in Paris in 2015 and led to the creation of the Paris Agreement. Under this significant piece of legislation, each country committed to bring forward national plans outlining how much they would reduce their emissions, which would be updated every 5 years.

COP26 will need to deliver even more ambitious commitments to keep the holding of temperature rises to 1.5 degrees within reach, as well as emission reduction targets that align with reaching net zero by the middle of the century.

What is the impact of transport on climate change?

Road transport accounts for 10% of global emissions, and its emissions are rising faster than those of any other sector. To meet the goals of the Paris Agreement, the transition to zero emission vehicles (including cars, vans, buses, trucks and lorries) needs to happen at a much faster rate.

As well as the types of vehicles being used, we also need to consider the impact of our individual travel behaviours. Earlier this year, the Welsh Government launched its ‘Llwybr Newydd- The Wales Transport Strategy’, which commits to creating an accessible, efficient and accessible transport system that makes people less reliant on cars. Key targets in this strategy include:

What are the views from across the Welsh transport sector?

Below are a series of contributions from representatives across the Welsh transport on the COP26 climate targets related to transport and the role the Welsh Government, wider industry, their organisations and we as individuals have to play:

You can visit the COP26 website to find out more about the conference and the Welsh Government website for further details on the ‘Llwybr Newydd- The Wales Transport Strategy’. The Welsh Government have also recently launched their Net Zero plan, showing how they will put Wales on the path to net zero by 2050.